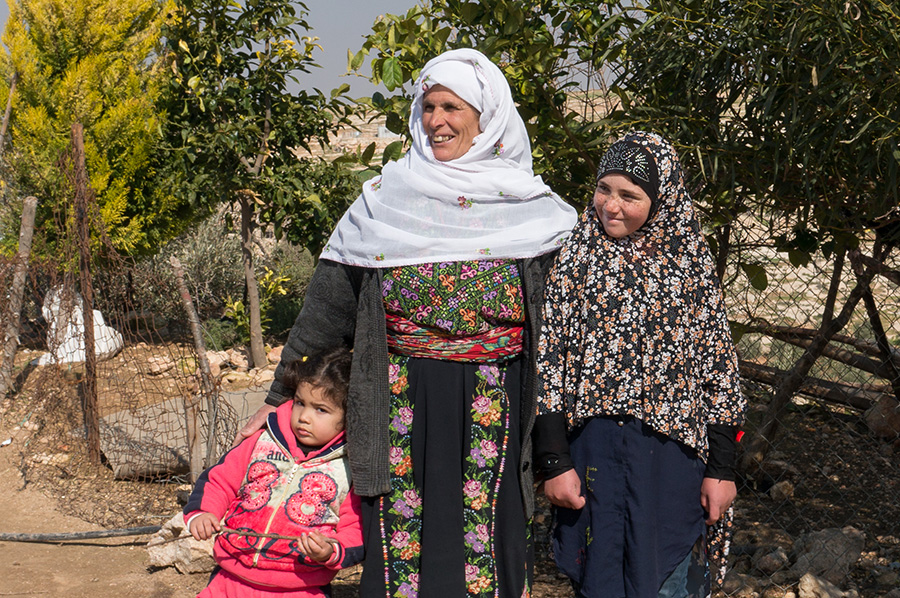 She is widowed and the matriarch of a large family. Of her eight children (four sons and four daughters) two sons and their families live alongside her in Sha’eb al-Buttum.

Tell us about life for your family before 1967
My family is originally from the area of Arad/al-Mirkez. Back then the entire area between Arad and Yatta was called Masafer Yatta [the rural periphery of the town of Yatta] and people could move about freely. After the Nakba, al-Mirkez was divided and my family could no longer reach the part beyond the border. For more than 100 years people moved seasonally between al-Mirkez and Sha’eb al-Buttum and they continued to do so after 1948. I was born here in Sha’eb al-Buttum, in a cave. And I have lived in the same home for the past 30 or 35 years.

How did things change in 1967?
The occupation was like a bad dream. In the ‘70s and ‘80s settlers and solders would come to the area and confiscate our herds. They would take them to Jericho for two or three days and arrest the shepherds. We would have to pay a fine to get the sheep back and free the men. My husband and I were married in August 1973, in Yatta. The wedding lasted for 20 days and my dowry included 100 dinar, 20 gold [Ottoman] coins, a gold necklace, earrings and a ring, and clothing worth 10 dinar. While the children were growing up, my husband tended to the herd and I was home taking care of the children and the housework along with my sister-in-law.

My husband was murdered by settlers in 2001. He was driving to work with some other men. When they reached the Bani Na’im junction a settler came and shot the people in the car. He was in a coma for three years before he died. My oldest son Muhammad was 30 at the time, and the youngest daughter was 10. Life became very difficult after that; I had to take care of everything.

How has life changed in the last ten years?
Jamal: A lot has changed in the last ten years. I was 25 when the electricity came. I remember before that all we had was a battery-operated radio. The electricity has brought development and growth in the community. First came the electricity, then the water systems, an access road, and the school that was built 4 years ago [the first two are Comet-ME projects and the last two were implemented by other NGOs; the school has about 45 students, boys and girls, from 1st through 7th grade].

Nuzha: The electricity is a precious gift. In the past, we had to do everything by hand, like laundry and making yogurt. But the electricity has helped us develop our lives and has had a very positive impact. In the past we had to draw water by hand. Today we have the pumps and it makes things much easier. The children can study at any hour that they want, including the evening. They use computers, watch television.

Jamal: I guess you could say that today there is more development but also less security.

With your support we can support others